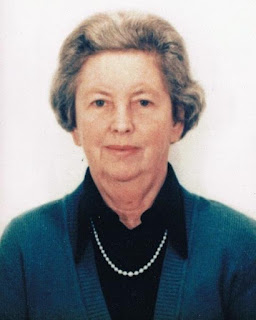 Anthony and I remember her very frequently and with much love because we owe her so much.

She gave everything for us, and as time goes by, our appreciation for her kindness, sacrifice and love towards us, her "boys", only grows.

In Chile we use the phrase "Madre hay una sóla" ("Mother, there is only one") and, as today is a very special day, we will remember and honour Mum by together attending a musical (Follies, presented by The British Commonwealth Society) and afterwards we will celebrate her memory with a couple of drinks.

We also remembered her last Sunday, the 26th, by playing, together, the Copa Hermanos doubles golf tournament ( greensome) at her beloved Prince of Wales Country Club. We shot an excellent 65 for a most acceptable second place net (and 77, gross. for a very reasonable top ten result).

Some months ago, Anthony wrote a few lines about Mum and her life, for a friend. We would like to share them again today:


"Our mother Ory was born in Talcahuano, Chile, being the 3rd of six sisters for a total of nine siblings.

She was home schooled except for a brief stint in a catholic school where she was told that all non catholics would go to hell, but owing to the fact that she was an Anglican, not so far in!

She excelled at sport, showing a keen competitive spirit.

After some years she emigrated to Santiago where she became a secretary for a British company.

On the outbreak of World War II she followed other Anglo Chileans and most of her siblings as a volunteer to the Allied armed forces and sailed off to Great Britain where she was received by her numerous Cooper/Gubbins relatives. 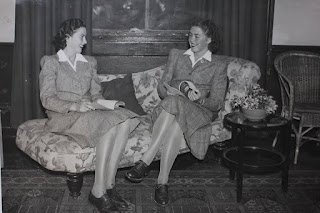 She proceeded to join the W.A.A.F. where she trained to be a radio technician and served repairing fighter pilots’ radios while they waited to take off for repeated sorties or air battles.

After several months of doing this, she opted for a change and became a meteorologist, generating live time reports for the fighter pilots at an airbase whose name we do not remember. Many times a prediction of the wind’s direction was important in order to line up planes on the ground and she took it very hard when her predictions were not right on the mark, showing a trait of character that contributed to a very successful post war professional life.

She once told us about how some new Anglo Chilean volunteer from Chile had boarded for a week with relatives in London with whom she was staying and had promptly spread a week’s worth of butter ration on his toast while everyone looked on with typical English politeness!

She also told us about how they had to cope with the loss of young pilots who they may have had a drink with the night before in the pub or have waved to as they took off for battle and who never came back. They would ask the returning pilots about the missing one and the answer would be a simple “He bought it over...” and that was that, having learned to swallow their grief and to move on with the job. Her most devastating blow was the loss of her brother Tommy  who “Bought it” over the English channel during a dawn raid in a Mosquito fighter on a German airbase on the french coast. His body was never found.

At some point in time, she was granted leave and travelled to Ireland with her sister Joan where they visited relatives who received them like royalty. She would often remark that Ireland was one of the most beautiful places that she had ever visited.

In one of her visits to South America House she caught a glimpse of a seasoned army officer sitting at the bar and asked her companion who he was. “That’s Leslie Cook from Viña del Mar just back from four years in Burma fighting the Japanese” was her friend’s answer. Little did our mother suspect at the time that she would later meet him at a hockey match back in Chile after the war and proceed to marry him and have us, their children!.

Back in Chile and having married Leslie,  Ory continued to work as a secretary for FAO (the UN Food and Agriculture Organization), but due to her excellent command of English she was often asked to translate documents from Spanish into English. This led her to sit the very difficult UN international translator’s exam which she passed in spite of never having been tutored in French and to taking up a post as international translator for ECLA (“CEPAL”)  or ECONOMIC COMMISSION FOR LATIN AMERICA.

This change in status helped greatly in the tumultuous political years ahead and also financially. 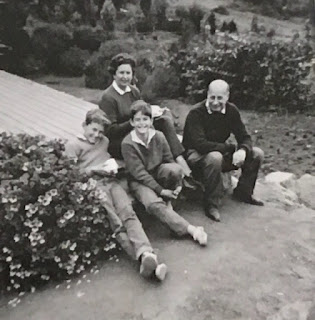 The subsequent years were spent going happily practically every weekend to our seaside home in Cachagua where our parents had many friends and enjoyed nine holes of golf whenever possible on the very picturesque course there.


Our mother was very close to her brothers and sisters and the early deaths of Tommy and Brian were particularly hard on her; also Cynthia’s emigration to Australia in the late 60s was a sad occasion.  Fortunately Gerald, and Ruth remained in Santiago and there were frequent happy family reunions in each others houses, specially surrounding visiting family from abroad such as sisters Evelyn, Joan, Doris and Cynthia, often with their respective children, our dear cousins.".

We will always remember you.

Terence, Thank you for sharing with all of us, aunt Ory’s interesting and beautiful story. 🙏🏻

I have read the lovely comments you both wrote about dear Tia Ory and I have to say, it made me feel very emotional. She was a very dear lady and I remember her so well. Gently and kind, very feminine, highly intelligent and yet so modest. I can remember visiting her apartment just off Colon many times with my parents. After you Dad’s death my father and mother kept in close contact with her as she lived so near.

The nine Cooper children were really quite an extraordinary group. Considering that the girls were mostly home taught – in the ‘school room’ at the old Victorian house in Pedro de Valdivia part of Concepcion, they turned out to be remarkable in their own way. They were all quite different as were the boys. Apparently when Dad came back from Marlborough (a year early as they had run out of money!) he was confronted with two new sisters that he had not met. I wonder if one of the was Tia Ory.

During her work in the UK she must have come across Aunt Olive who apparently opened up her apartment to all the family from Chile. They would drop in when on leave from the services and there was always somewhere to sleep.

I had no idea that Uncle Leslie had served in Burma during the war. That must have been very tough. I wonder how much information you have about that part of his life – there is a lot on the internet. Jane’s step-father was taken prisoner when Singapore fell to the Japanese. He spent three and a half years as a prisoner of war on the Burma railway. We visited that area a few years ago and it was all very moving.

Bueno Primos, we hope to be out in Chile for 3 weeks from end of January and hope we can get together for a good chat.

Un fuerte abrazo and all the very best.